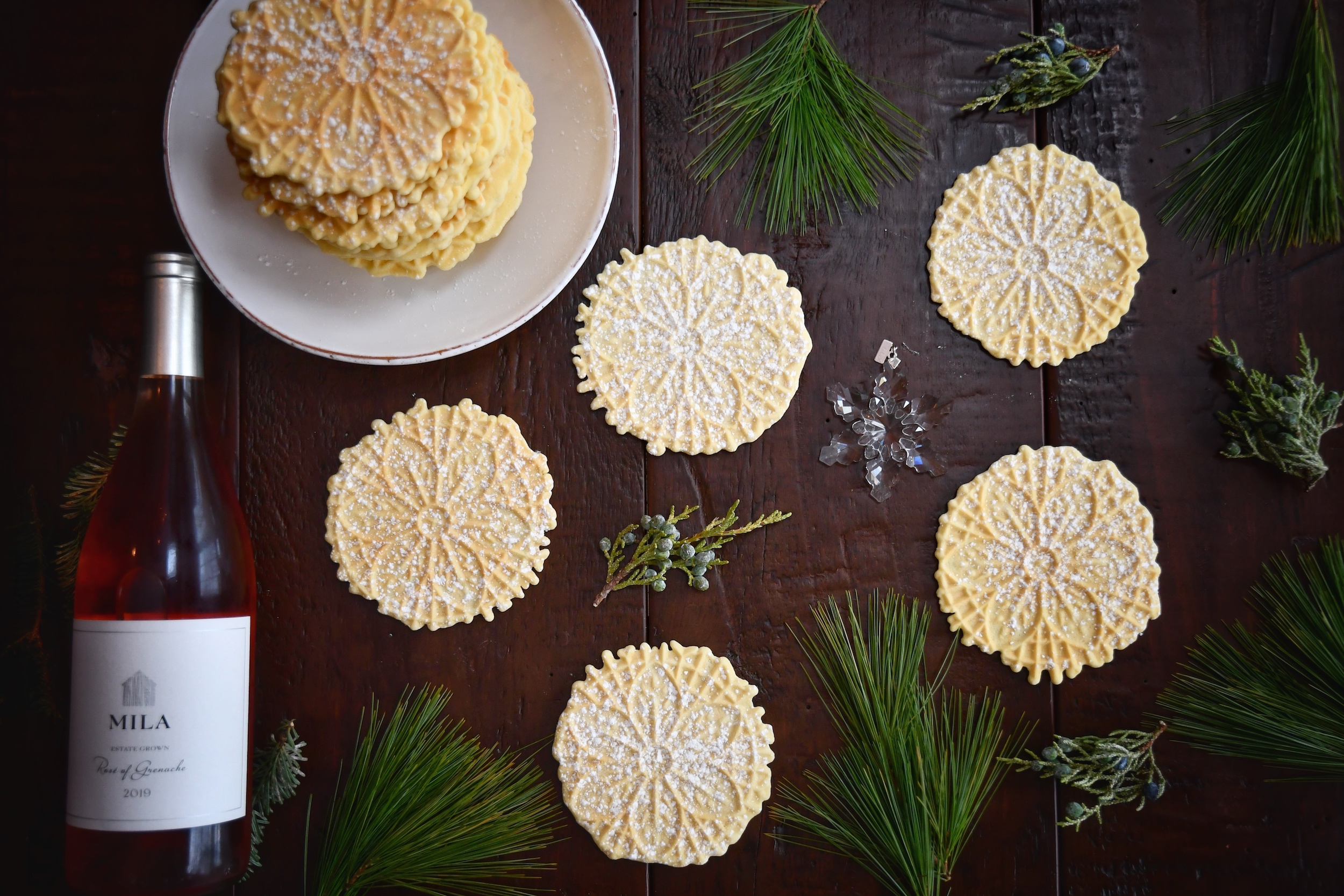 December is a quiet month in the cellar. The wines are settling in their barrels, and will do best if they aren’t disturbed. So Michael stays in Ohio all month, thinking up ideas for the new year. (Should we start a serious wine library of old vintages? What about making another vintage of whole-cluster Grenache?)

Meanwhile, Loretta enjoys keeping up with family holiday traditions. Below, she shares her Nonna Marianna’s special recipe for pizzelles, which pair beautifully with our rosé. Give our recipe a try and let us know what you think.

Happy holidays, and a very happy New Year, to all of you. 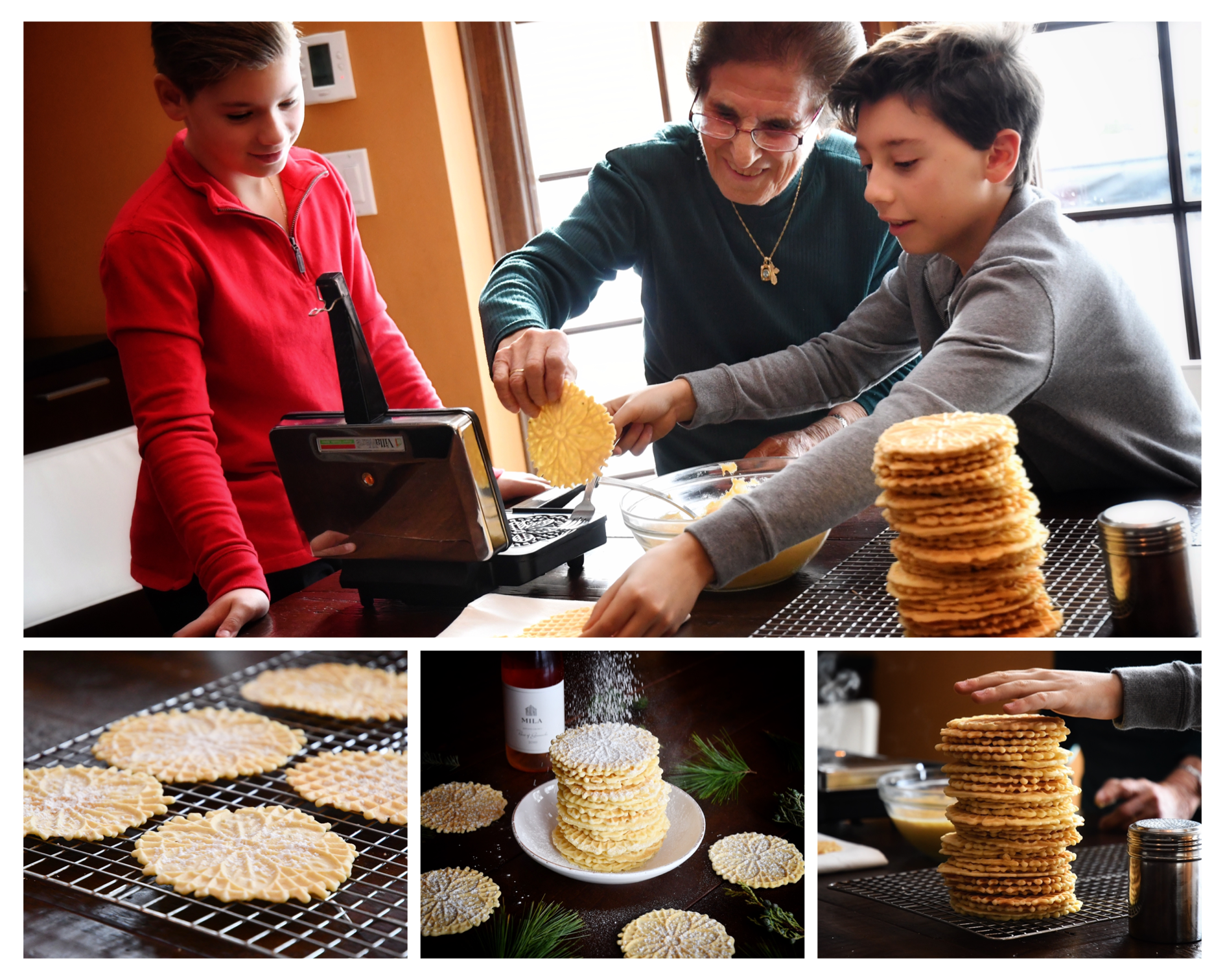 My fondest childhood holiday memories are of the sweet aroma emanating from my Nonna Marianna’s kitchen as she made Italian Christmas cookies—especially my favorites, pizzelles.

As soon as we got a whiff, my sister and I would run to the kitchen, ostensibly to help, but actually to steal pizzelles while they were still warm. We’d stick around to hear some of our Nonna’s funny anecdotes about the old days, then run back to play, only to reappear an hour later for another round of pizzelles and stories.

Like snowflakes, no two pizzelles are identical. Their lacy edges and powdered-sugar toppings are always slightly different, and each one comes out of the hot iron press its own unique shade of golden-brown.

My Nonna is 90 now, and still a spitfire. As you can see, she continues to entertain children—nowadays it’s Roco and Luca—with her wisecracks and batches of warm pizzelles. Her recipe and her comedy routine are just the way I remember them from my own childhood. When we were shooting these photos, I asked my Nonna how long the batter should bake. She looked at me with a smirk and said, “I say three ‘Ave Marias’ and then they are done.”

This recipe requires a pizzelle press, available through home and kitchen stores.

For a printer-friendly version of the recipe, click here:  RECIPE

Beat eggs and sugar until smooth, about two to three minutes. Then add melted butter, vanilla, and optional anise seed and beat until blended.

Heat your pizzelle press. Place about 1 tablespoon batter in the center of each griddle and press handle down for 30-40 seconds. Lift open, remove cookie, and place on a wire rack to cool. Sprinkle with powdered sugar if desired. Store in an airtight container in a cool dry place for up to 30 days. These cookies also freeze well for up to 6 months. 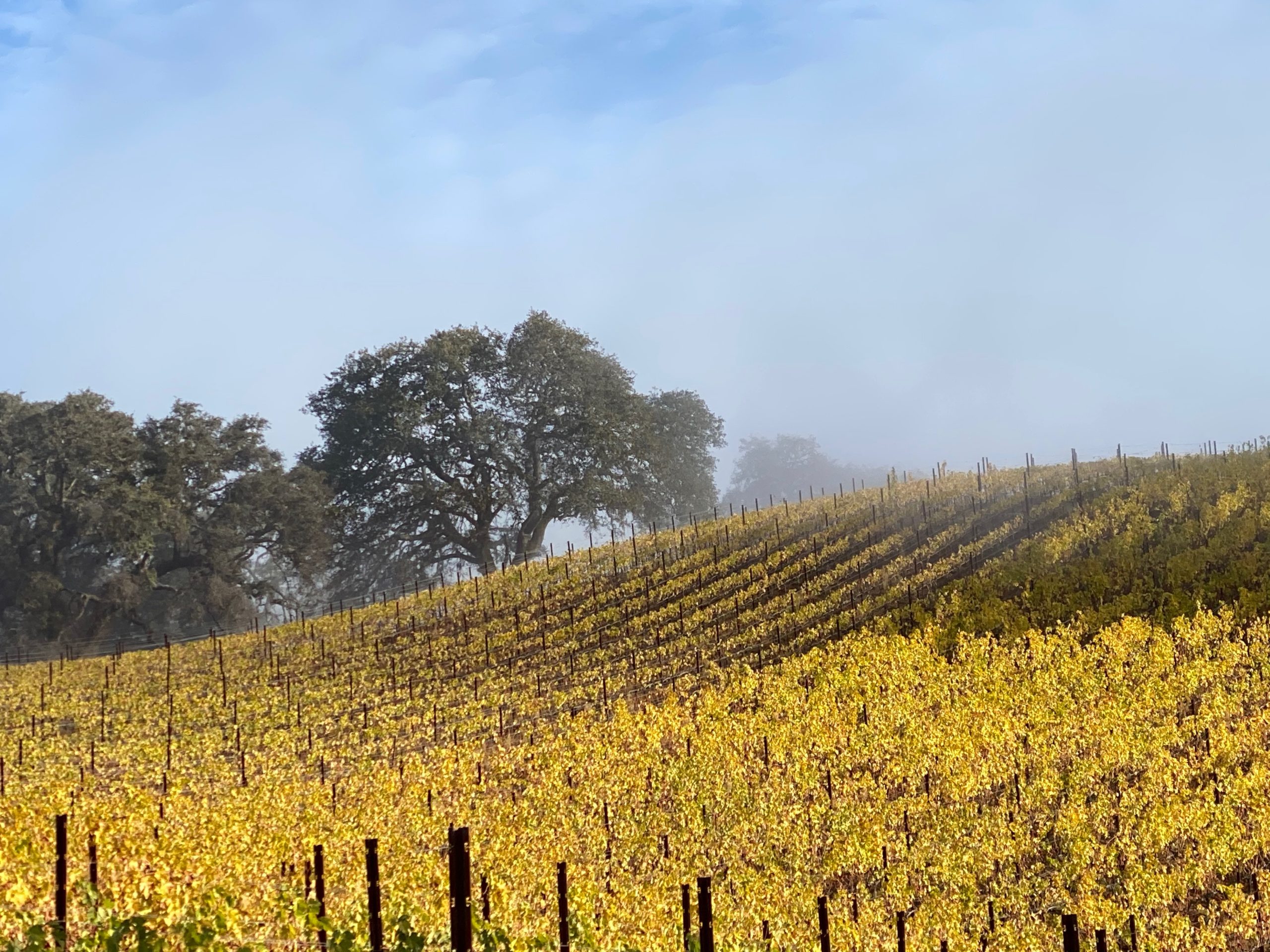 notes from the cellar:
the dirt on dry farming

‘Tis the season for storms in Sonoma: December and January receive five to six inches of precipitation per month. Our steeply graded hillside vineyard is rocky at the surface, but there is enough clay content in the substratum to reserve some of that winter rainfall for summer.

We have been tracking the microclimate at our wine farm for the past 17 years using a weather station that gathers data from soil probes around the property. So we know that our summers are particularly hot and dry thanks to the intense sun exposure our hillside slopes get. Our vines need every drop of residual moisture they can soak up from the water table during the growing season.

Ideally, winter’s reserved rainfall would be so plentiful that we would not need to irrigate our vines (that is, after new baby plants are established) during the summer. The strongest grapevines, it is said, are self-sufficient, with roots that have ventured deep into the substratum to seek out water and nutrients.

Dry farming—or going all year without irrigating—is a matter of pride for those vinetenders who are able to pull it off. In Europe, dry farming is common, and in some regions, irrigation is not even permitted. The most extreme example of dry farming we have seen was in Priorat, Spain, where the terrain is steep and rocky and the climate is arid. This region has been producing the most important Spanish wines of the modern era since the late 1990s.

Irrigation, when we visited, consisted of workers climbing up these steep slopes with hoses in hand, just to keep baby vines alive. But quite a lot has changed since then. 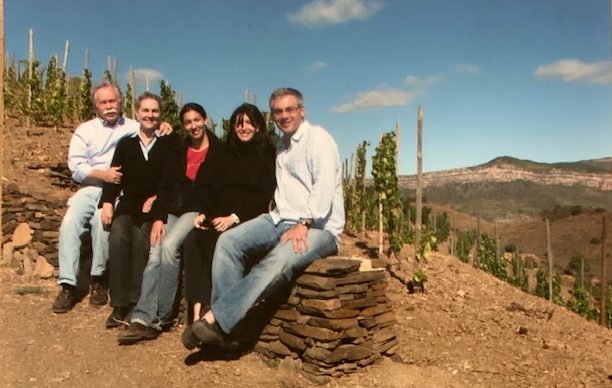 (Here we are back in 2007 at the legendary L’Ermita vineyard in Priorat with Phil Freese, Zelma Long, and Sara Pérez, winemaker and owner of Mas Martinet.)

For example, the group of world-renowned vintners we met were all sharing one donkey for vineyard work! (Given the prices their wines sell for, we are willing to bet they all have their own tractors now.) Also, due to climate change, we hear that Priorat is now using drip irrigation.

Most years, we, too, drip irrigate. This is a minimalist approach, dripping water onto the root zone of each vine rather than spraying it into the summer air to evaporate. We use it sparingly, and just in July and August.

There is no need to water the vines during temperature spikes earlier in the summer. The vines simply shut down—hibernate—in the face of extreme heat, coming back to life when conditions are milder. But if the grapes are ripening and harvest time is near, a vine that shuts down won’t bounce back. And we’d prefer not to harvest raisins.

So every summer, we are thankful for the winter storms that got us through to July. They allow us to dry farm most of the year, and we believe our vines are stronger because of this. 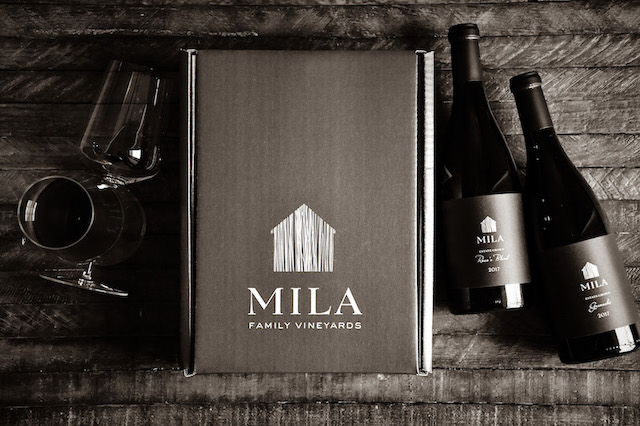 Local customers can still pick up our mix-and-match holiday cheer packages! Our three-bottle gift set comes in an attractive wood wine box; our two-bottle set is presented in the beautiful black box pictured above.